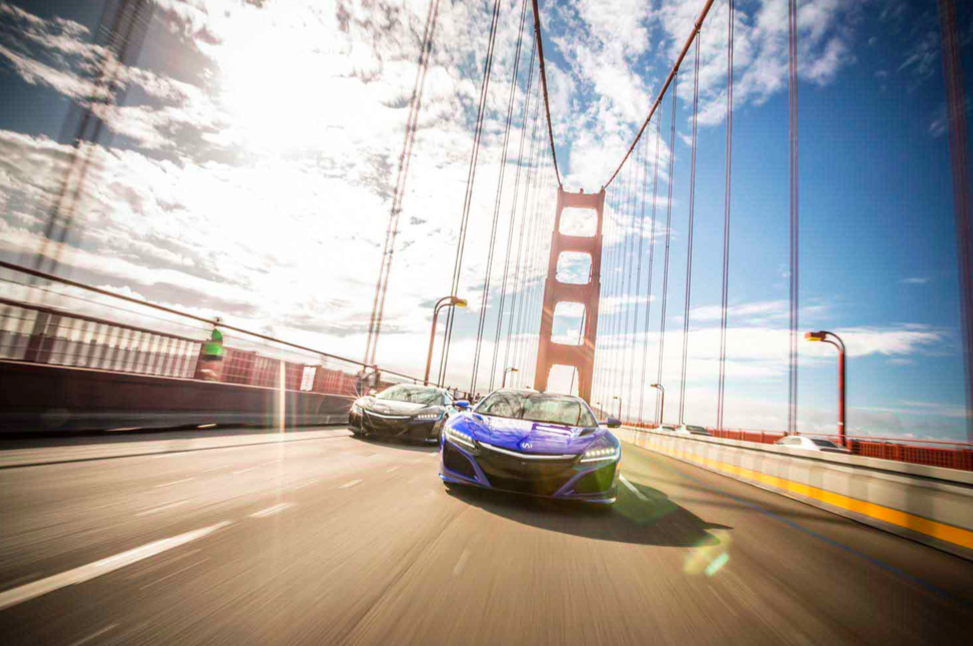 It;s a bit of a difficult review to write up since there are no official performance numbers yet. But we do know some things about the NSX.

Quote:
There's a twin-turbo, dry-sump, 3.5-liter V-6 behind the passenger cell good for 500 horsepower and 406 pound-feet of torque. It raps to an impressive 7500 rpm, pulling to redline like a good Honda mill.
The reviewer is able to talk about the hybrid powertrain in detail though, which is nice to hear about since that is the new thing about the NSX.

Quote:
The system uses the electric motors with their instant, brilliant torque, to fill in the powerband while the turbos wake up. There's no lag. None. You'd never know they were back there if it weren't for the whistle of forced induction at your ear and the off-throttle chatter. If electrification really is coming for us all, I hope and pray it looks just like this.
They point out a weight issue with the NSX, despite it using lightweight materials.

Quote:
There's also the weight issue. Despite a chassis intense with lightweight materials like aluminum and carbon fiber, this car tips the scales at just over 3,800 pounds  some 700 more than the fattest first generation machine. And, like the original NSX and the Ferrari 458 Italia, the new car only puts 42 percent of its heft on the front tires. The engine may be in the middle, but the weight isn't.
It's a lengthy review, which is all the more valuable because there haven't been many reviews on the 2017 NSX as of yet. Definitely worth the read.


Join Date: Jul 2013
Posts: 367
What is with the weight being so high? It's competitors don't have such high weight numbers and that weight has real impacts on performance. Could Acura just not afford carbon fiber everywhere?
mr.smith is offline
Quote Quick Reply
post #3 of 25 (permalink) Old 10-28-2015, 09:36 AM
FastAndFurious
Senior Member


Join Date: Jul 2012
Posts: 1,031
Automobile Mag will waste your time, it was 20% real information with 80% fluff. I rather wait for MotorTrend, Chris Harris or someone, some other publication that will highlight what WE want to know.


Join Date: Sep 2013
Posts: 344
Quote:
Originally Posted by |\|SX View Post
Automobile Mag will waste your time, it was 20% real information with 80% fluff. I rather wait for MotorTrend, Chris Harris or someone, some other publication that will highlight what WE want to know.
And what do you want to know that you feel hasn't been covered by the reviews that are currently out?
St.Who is offline
Quote Quick Reply
post #6 of 25 (permalink) Old 10-29-2015, 12:06 PM
|\|SX
Senior Member

These guys should have talked about how it is in comparison to other vehicles; driving dynamics, feel, handling, power delivery throughout the power range, what it's like on road and track, etc.


Join Date: Jul 2012
Posts: 1,031
Never seen that comparison, but I know there has been discussion here about McLaren alternatives, post the review talking about the McLaren here.


Join Date: Sep 2013
Posts: 344
Quote:
Originally Posted by |\|SX View Post
Never seen that comparison, but I know there has been discussion here about McLaren alternatives, post the review talking about the McLaren here.
Quote:
And the transmission? Porsche sets the pace with its PDK when it comes to dual-clutch gearboxes. Honda readily admits it developed everything in this system, from the hardware to the software, in just 18 months  an eye blink for a manufacturer. It's a strong effort, but still falls short of the German system. Where the 911 can be eerily anticipatory, choosing the correct gear half a second before you knew you wanted it, the NSX manages to be underfoot in anything less than a full, deep-throttle bashing. Manual mode is better, offering very fast, very smooth shifts both up and down the pattern, but I still saw occasions where requesting a gear did not yield a shift.
That's the closest thing to a comparison that I can see.
St.Who is offline
Quote Quick Reply
post #10 of 25 (permalink) Old 11-02-2015, 09:59 AM
FastAndFurious
Senior Member


Join Date: Aug 2015
Posts: 490
Odd that road and track didn't mention anything bout the under steer when I found 2 reviews which stated that the Acura NSX does tend to do that.
FastAndFurious is offline
Quote Quick Reply